What Happened to Your Eyebrows? 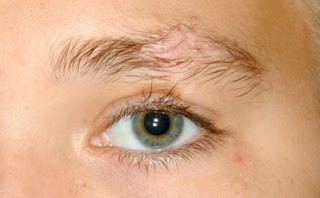 I have a 5 year old student who always comes to class with plucked eyebrows. At first, I thought she just accidentally played her mom’s shaver. I always asked her, “what happened to your eyebrows?” she will just give me her sweet smile as her reply. Sometimes, I asked her, did you play with your mom’s shaver?, then she will just nod and smile. I noticed that her eyebrows are being plucked regularly. That is why I was bothered a bit and thought of talking to her parents about it.
Last Wednesday, she celebrated her 5th birthday at school. Her mom and grandmother was there so I finally took the chance to talk to them about the child’s eyebrows. By the way, she celebrated her birthday with no eyebrows at all. I asked her mom about it and she told me that it was also there problem because the child keeps on plucking her eyebrows especially when she’s left alone in the house. They have tried a lot of strategies and reward system on helping her to overcome it but the child keeps on doing it. Hearing about the mom’s story, I was a bit concerned about the child. I think there is a psychological implication about her behavior as what I have learned in my Psychology class before.
What I did, I browse over the internet and found out about Trichotillomania.It’s a psychiatric condition in which an individual has an uncontrollable urge to pull out his or her own body hair. For people suffering from trichotillomania, hair pulling is more than a habit. It is rather a compulsive behavior, which the person finds very hard to stop.

People with trichotillomania pull their hair out of the root from places like the scalp, eyebrows, eyelashes, or even the pubic area. Some people even pull handfuls of hair, which can leave bald patches on the scalp or eyebrows. Other people pull out their hair one strand at a time. Some inspect the strands after pulling them out or play with the hair after it’s been pulled. About half of people with this condition also have the habit of putting the plucked hair in mouth.

Until now, I’m a bit worried about my student but I am hoping that it isn’t so serious like what I have found out. I am also praying that my student and her parents will be able to find out remedies on her behavior.
1 comment
0
FacebookTwitterPinterestEmail
previous post

Why I Enjoy Dining at Misto?

Get Globe Rewards for Sharing an Act of...

Losing a Loved One

Meeting the Demands of the 21st Century Through...

#makeITsafePH: Protect Your Teen from Cyberbullying

When is the Best Time to Remodel?

I Won a Pampering Package for 2 from...

The Librewry Cafe: A Place to Read and...